Misadventures on the beaches of Sihanouk Ville 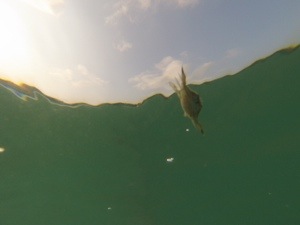 Every misadventure starts off with a great adventure in mind. What could possibly go wrong with an afternoon lunch, private boat tour across the sea ending with beers and snacks on the suggestively named Bamboo Island.

4 hours of relaxing blissful touring, with a sneaky snorkelling session too!

Lunch was typically Cambodian amazing. Large platters of seafood fried rice, pork BBQ ribs and chicken amok. With more than enough food to feed a dozen and not our small group of 6. After putting ourselves into food comas we waddled after our boat guide, Diamond along the Sihanouk Ville beach (avoiding the riff raff of westerners enjoying cheap booze and cheap women) down to the pier.

As we approached the three boats, bobbling along to the beat of their own drum, a slight tingling of anxiety started to spread through our group. We were excited at the prospect of hoping into the Pirate Ship. Others not so much. Yeah I’m sure you can see where this is going! Pirate Ship! Not the beautiful white Harbour style yacht.

With mixed feelings we threw ourselves at the mercy of the Pirate Ship. By now the Pirate Ships feelings had been hurt and she refused to take us away from the hustle and bustle of town. Instead she spluttered, cough and groaned at the unfair judgement she had received from the foreigners. For the first time, we had been refused service by a Cambodian! Even in the form of a boat.

With a broken heart we left the Pirate Ship and waited like lost children for guidance from our Diamond.

Sure enough within 5 minutes we found ourselves in Cambodian style tuk tuks cruising along towards Otres beach and hopefully another boat.

We thought our adventure had stopped at the stunning Otres Beach. As we strolled out onto the crisp white sand, past the sunburnt middle aged men getting pedicures from well dressed beach workers, we saw in the distant our trusty steed Pirate Boat the 2nd.

The captain swiftly pulled her in, threw down the anchor and graciously rolled out the welcome matt, aka rusty metal ladder. With no pier available we started to wade through the clear sea out to the boat. Only to have serval large waves throw themselves in disguise at the poor attitude being shown by the foreigners. Our new found ally Pirate Boat 2nd refused to accept the insult of the sea and threw herself about. Which ultimately resulted in the propeller cutting the rope that was holding the front end anchor.

Our little ship was now showing signs of distress and mutiny as she bobbled away freely in the sea. The captain rushed to her aid, despite the water being deeper then his height. He flung himself out of the water and into her warm embrace.

Despite his reassurances that she was ok our new little boat refuses to come closer to the shore line. As she was having her diva moment we rolled up our dresses, places our valued items onto of our heads and swam out to her.

With the grace of a baby seal and the help of our guide I flopped and flung myself onto the now soothed boat. Within minutes we set sail across the bay to see the little fishes.

A snorkelling session in the sun provided our little group with nicely needed R & R time. Our time in the water cut short when a booze ctuzie style boat turned up. It seems that even the fish of Cambodia know that hip hip from the early 90s isn’t cool. When the fish left so did we.

As the afternoon went on we visit the famous Bamboo Island. Which once was a beautiful spot I’m sure. Even if it didn’t look like a teenage girls bedroom. The lovely couple at the restaurant helped us with cold beer, snacks and weary smiles. A long night of cleaning up the beach and surrounding areas faced this lovely couple. I just couldn’t shake of the guilt of seeing such a beautiful place in the process if destruction due to western tourists. Of all ages. Just because you paid $1 for a beer doesn’t give you the right to throw it away.

After a somewhat relaxing hour at Bamboo Island we headed for our temporary home and watched the sun set over small village fishing boats.

Our afternoon was filled with 3 beaches, two boats, two tuk tuk rides and some amazing scenery. I for one am calling this misadventure a successful adventure! This is why we travel.

And as our guide says- This is Asia, go with it!

All photos are unedited and taken with our GoPro Hero 3.