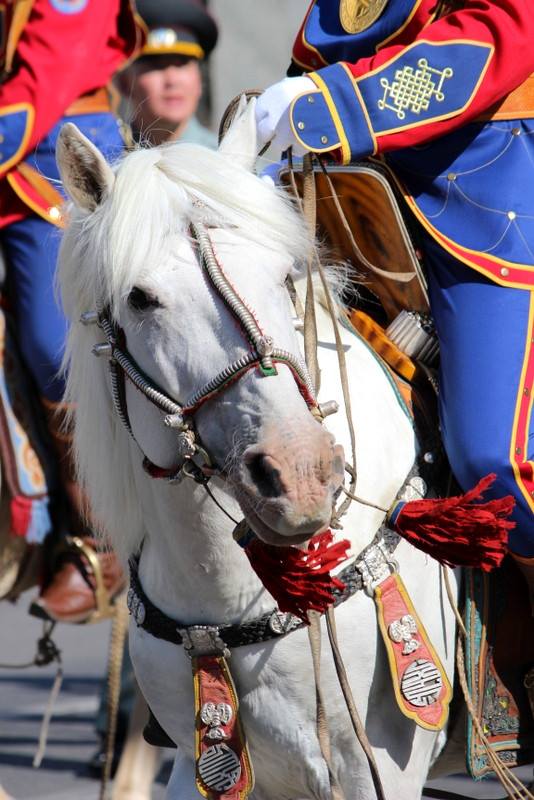 What better way to celebrate turning the big 3-0 than with a stadium packed full with around 20,000 random, happy strangers, a good dose of synchronized communist styled dancing, amazing horse riding AND fully grown men wrestling one another whilst pretending to be eagles. You’re right there wasn’t a better way. So on July 11 we found ourselves along with a lot of other people walking through the streets of Ulaan Baatar towards the National Sports Stadium to celebrate with the opening ceremony of the Nadaam Festival.

Our day started off relatively early as we meet our translators in the hotel lobby and headed off to the main city center to hustle and bustle with the crowds to see the dispatching of the Yesun Khult Tsaggan Tug (Nine White Banners). This parade is heavily stepped in military nostalgia, with the Nine White Banners being paraded through the city and out to the stadium. 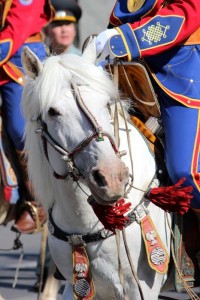 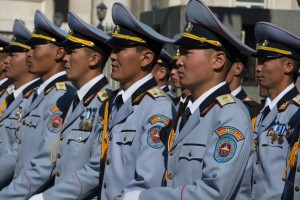 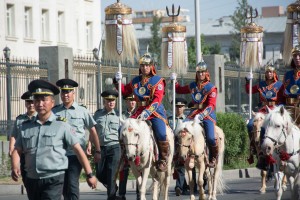 Nine White Banners making their way to the stadium 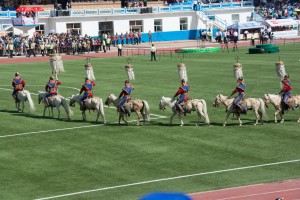 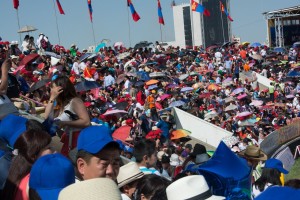 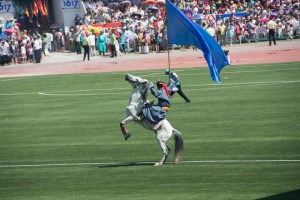 This horse was happy.

The Nadaam opening ceremony caused quite a bit of controversy. This year the organizers did not pay adequate respect to the Mongolian culture or traditions (so we where told). Seemingly there was little homage paid to ancient gods and more respect paid to the new gods of Mining, Coca Cola and commercialization.  Which was seen clearly in the heavy marketing and many of the dances representing miners. My personal favorite was the hand clapping teams placed around the stadium with giant foam hands, telling the crowd when it was appropriate to clap. 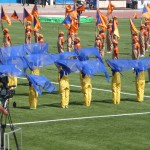 Not so traditional dancing 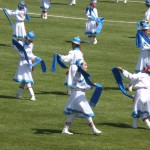 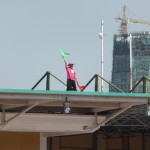 Wave Man controlling the horders of dancers, acrobats and performers. All from a top the stadium. 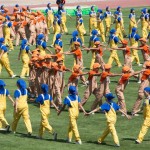 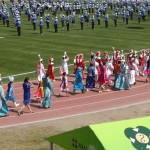 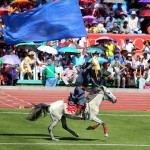 After the opening ceremony celebrations the games begin. Nadaam roughly translates to The Manly Games or the Three Manly Games depending on who you talk to. The end result is that there are three official competitive sports on display- Wrestling, Archery and Horse Racing. Unofficially there is also ankle bone competitions on display. The wrestling is the only sport that is still male only. 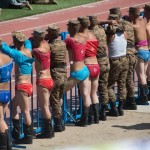 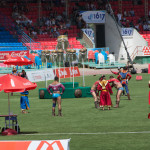 No idea who sponsors this…

The wrestling is certainly worth an hour or two of your time. The whole event takes around 12-14 hours to be completed with over 1000 wrestlers participating.  The competition is a single round elimination. The wrestlers perform a traditional dance to the judges, slap thighs and it’s game on! The aim is to not touch the ground with any part of your body bar your feet and hands. Some of the competitions run for mere moments and others where up to 10-15 minutes. Unlike Western wrestling there is no age or weight category. A young boy can be put up against a 150pound middle aged man! Though when we saw this happen the judges sent the younger boy back and waited for a more suitable opponent.

The number of rounds won during the festival determines the wrestler’s rank. The ranks of Mongolian wrestling, from the worst to the best, are unranked, bird (5th round), hawk (6th round), elephant (7th round), garuda (8th round), lion (9th round) and titan (winner with lion rank). Your rank is carried onto the next years competition should you choose to compete.

The horse racing happens outside the city limit and is around an hour drive. Though with the popularity of the races it can take up to four hours with traffic. Due to time restraints we opted not to see the horse racing and instead went to the Khusit National Park to see the last remaining wild horses. 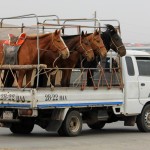 Horses on their way to the races 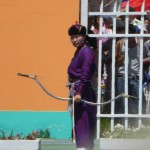 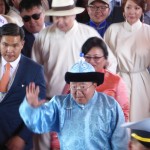 The President dropped by to wish me a happy birthday.

The Nadaam festival is held in the capital city of Ulaan Baatar from July 11-13. These three days are considered national public holidays for the city. Which means that everything is closed. Super shut up shop closed. If you are arriving before Nadaam make sure you have enough cash and food on you the day before. We really struggled to find somewhere to eat that night, as none of the bars, restaurants or cafes had any food to sell us. If you’re not in Ulan Baatar during these days but still want to see the Nadaam games there are plenty of smaller celebrations held on either side of these dates in the smaller regional cities and even in random mountainside communities.

As I was traveling with Zavkhan Trekking the team here where great and organized our tickets and a translator. Despite the price of the tickets saying 8000T (Tugrik being the Mongolian currency.) or around $5-10 USD we ended up paying $55 USD per ticket. Let’s be honest we where paying  WMT (white man tourist tax) for these tickets.  We really couldn’t complain as the team at Zavkhan Trekking delivered us legitimate tickets and a great day out, as well as warning us that there is a heavy hidden fee added by the ticket sellers to tourists and tour groups. There was no way we could guarantee legit tickets from our comfy couch in Melbourne. On the upside we received a free cap and free water when we entered the stadium.

Mongolia is a fairly safe and friendly country. Drinking, especially men, is a huge social issue. So be aware that as the day goes on the amount of drunk men you’ll encounter will significantly increase. Pick pockets are a huge issue in the capital. We took only the bare minimum with us. A little bit of cash, a camera and lip balm. You’ll need cash on you to purchase drinks, food and ice cream. 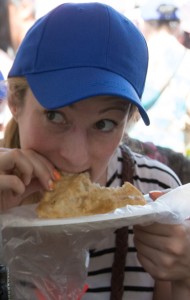 Eating khushuu for less than $1USD

The origin of Naadam festival is closely related to the history and culture of the country. Mongolians have abundant military history. There is no shortage of tales of the highly successful Mongolian conquests.  Originally the three manly games where a contest to assist military rules to chose their warriors based on their strength, movement and flexibility revealed in their wrestling skills, their eye-sight and hand-orientation shown in their spear-throw and archery skills, their patience and bravery exposed in their horse training and horse racing skills during public competitions. Furthermore, before and after major battles, the three manly sports – wrestling, horse racing and archery – were exercised as an organized event, which later adopted its present name – Naadam.

Later in the 1920s, Naadam started to take place as a nationwide celebration honoring the victory of the People’s Revolution and forming the independent nation of Mongolia. From that time, dominant image of Naadam has shifted from mass battle or physical training to national celebration.

If you are a festival junky like me than the Nadaam celebrations should be on your list of to do. 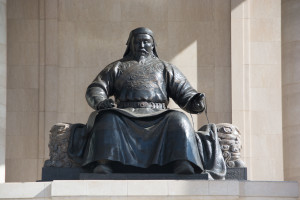 Chinggis Square- Statue of the great man himself.