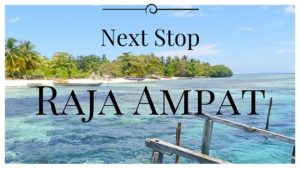 If I had a bucket list up and running and worth talking about this amazing announcement involving Raja Ampat would be ticking off a lot of the items. I’ve never been one to have a relaxing, resort by the beach style holiday. I keep on saying to James  “Next winter we are going off to some tropical island to be beach babes. Just relax, drink by the pool and catch up on reading. You know do the whole tourist thing.” Every winter we don’t do that. James ends up on an epic snow adventure, sleeping in a tent in the snow and I end up turning myself into a snow bunny and enjoying the downhill resort life style one day at a time.

Not this year! Not this month even. I’m really excited to announce that I’m off to explore the islands of Raja Ampat next week.

That’s the exact question I asked myself when I looked at the itinerary. Where in the world is Raja Ampat?

Located off the northwest tip of Bird’s Head Peninsula on the island of New Guinea, in Indonesia‘s West Papua province, Raja Ampat, or the Four Kings, is an archipelago comprising over 1,500 small islands, cays, and shoals surrounding the four main islands of Misool, Salawati, Batanta, and Waigeo, and the smaller island of Kofiau. The Raja Ampat archipelago is the part of Coral Triangle which contains the richest marine biodiversity on earth.
Thanks Wikipedia.

And then I got lost in all the amazing images of the beaches. Beautiful beaches. 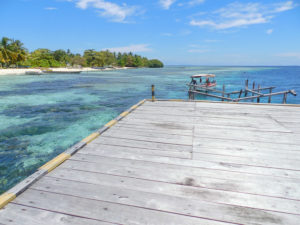 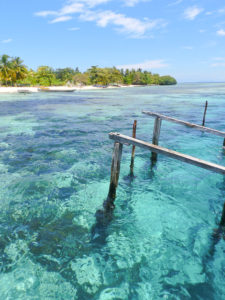 Photo credit to Wonderful Indonesia
So right now I’m really excited. This isn’t going to be a relax by the beach and drink cocktails kind of adventure. Beaches, islands, jungle treks, fish, hidden lagoons and spooky caves! What more could an adventurous lady ask for? Friendly people, great food and an epic sunset perhaps?
The organiser nerd within decided to delve a little bit more and find out about the area and people.

The history of the Papua Region

The Papua region has been visited by global traders since the beginning of the 7th century. European nations kept a presence in the region in the 16th century in the pursuit of various spices.

Irian Jaya became part of the Dutch East Indies in 1828 as West Papua Nugini (or New Guinea), which was then known as West Irian. The region remained occupied by the Netherlands long after Indonesia claimed its independence in 1949. After West Irian’s long freedom struggle, the province eventually reverted to the lap of Indonesia in 1969.
Raja Ampat Archipelago in the 15th century was part of the reign of Tidore Sultanate, a great kingdom centered in Maluku Islands. To run its government, the Sultanate of Tidore appointed 4 local kings to rule in the the island of Waigeo, Batanta, Salawati and Misool which were the fourth largest island to this day. The term 4 Kings who rule the islands becomes the root of the name Raja Ampat.

The regency which celebrated its anniversary on 9th May is now a Regency in the province of West Papua expanded from Sorong regency in 2003. 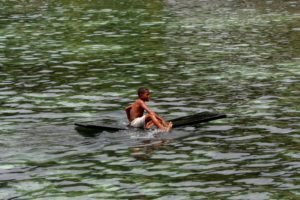 Climbing all 340 stairs to the very top of Piaynemo.
Exploring the secret mangrove park at Blue Water Mangrove.
Curious to see the cleaning station of Mantaray.
Feeding the fish at Sawinggrai Village
Taking amazing photos of the Kri Floating island with the stunning white sands and deep blue-clear blue ocean water. 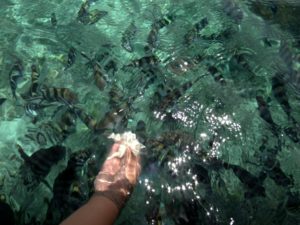 Rest assured there will be plenty of photos on on the Traveling Honeybird Instagram and Facebook account! Make sure you follow along to see the wonders of Raja Ampat.
Have you been to Raja Ampat? If so let me know in the comments below if there’s anything I should be seeing and doing.